I’ve made it to my second host in one piece, with much to tell from this Tango Voyage.  Outside of the sight seeing, wonderful food, crazy taxi drivers, little shops on every block, and learning the language, there is Tango. A lot of Tango, but not going overboard.  I have weeks, months in this Voyage, and I’m trying to stretch everything for as long as I can make it. The goal is to still have something left for when I return to help with the next step of my journey. Finding Tango has been pretty easy, thanks to Hoy-Milonga and their schedule, pretty accurate for the most part!

This venue was about 9 blocks from where I was staying, so quite close, and a pretty straight shot. The venue is nice and had live music 3 of the 5 Milongas I attended.  Went here one of the times as another venue didn’t have a Pre-Milonga class when it was advertised. Glad I went, as I met some friends, who suggested I come back for a charity event, which was amazing! There were also performances, friendly faces, and very welcoming, even if you don’t happen to know or speak Spanish. I went on days that there was a special event, an anniversary, and a charity event where the proceeds went to children and schools in need. Is this the norm for this location, I don’t know, but I experienced made me want to keep attending, but there are many more places to experience! I’m sure I’ll be coming back! 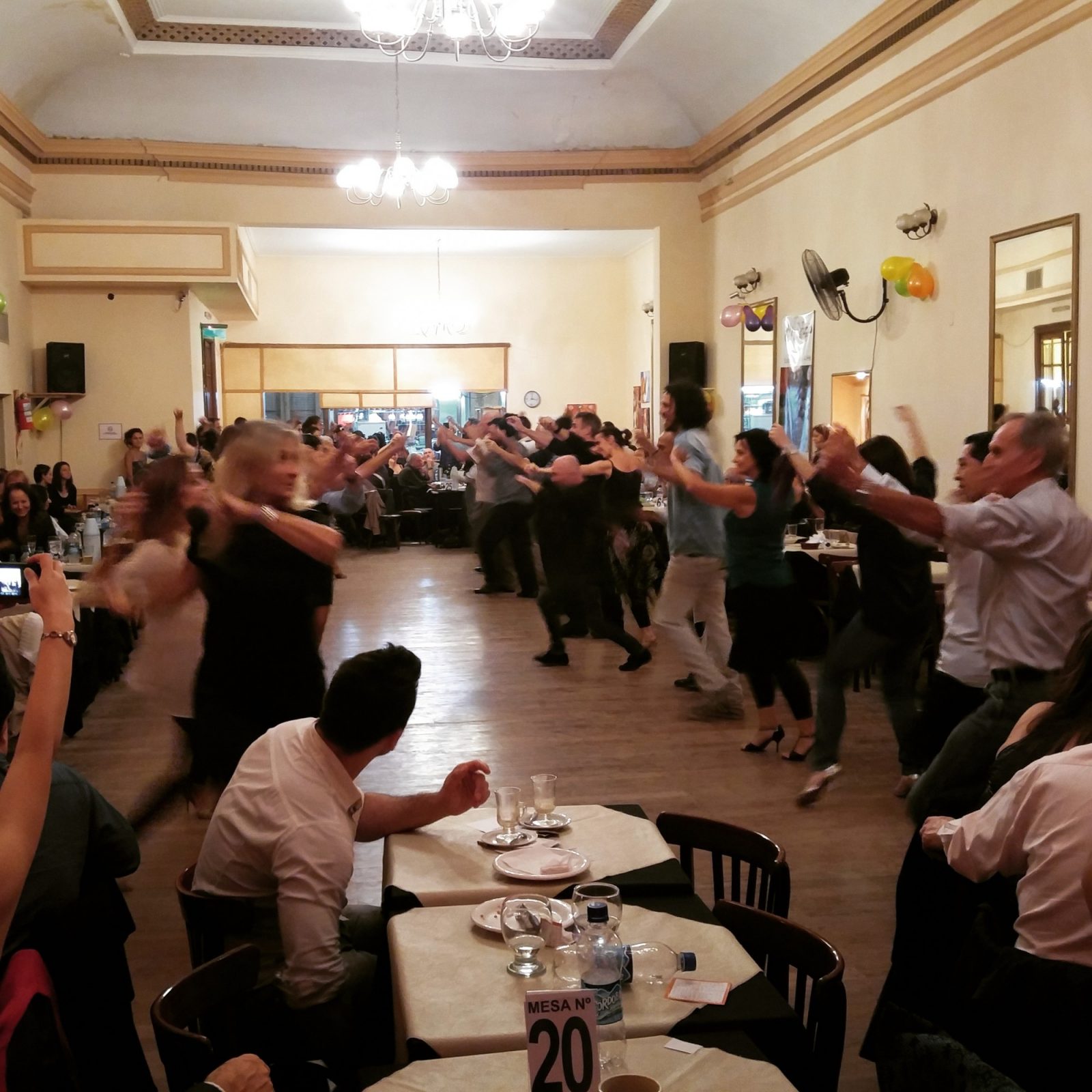 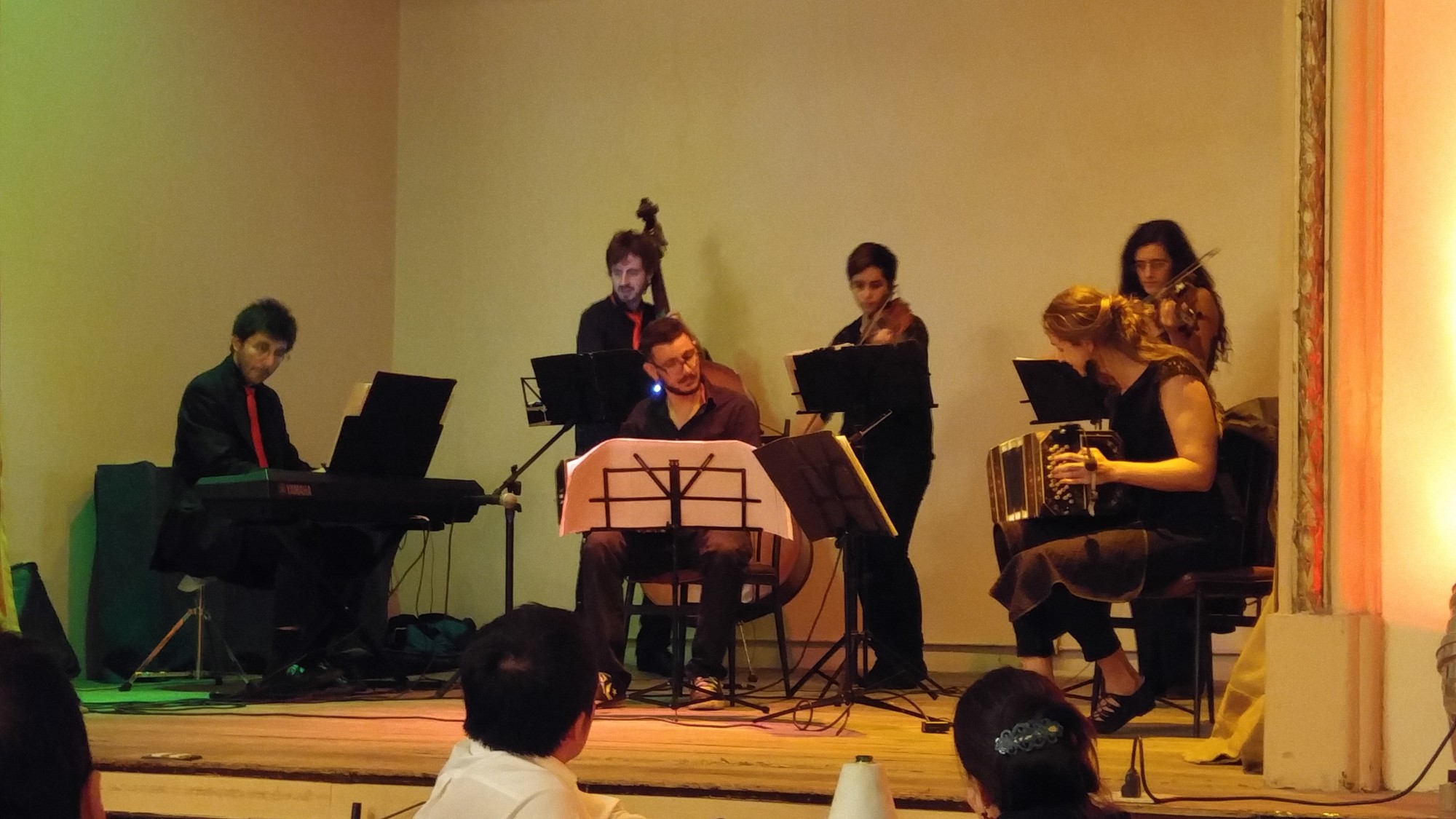 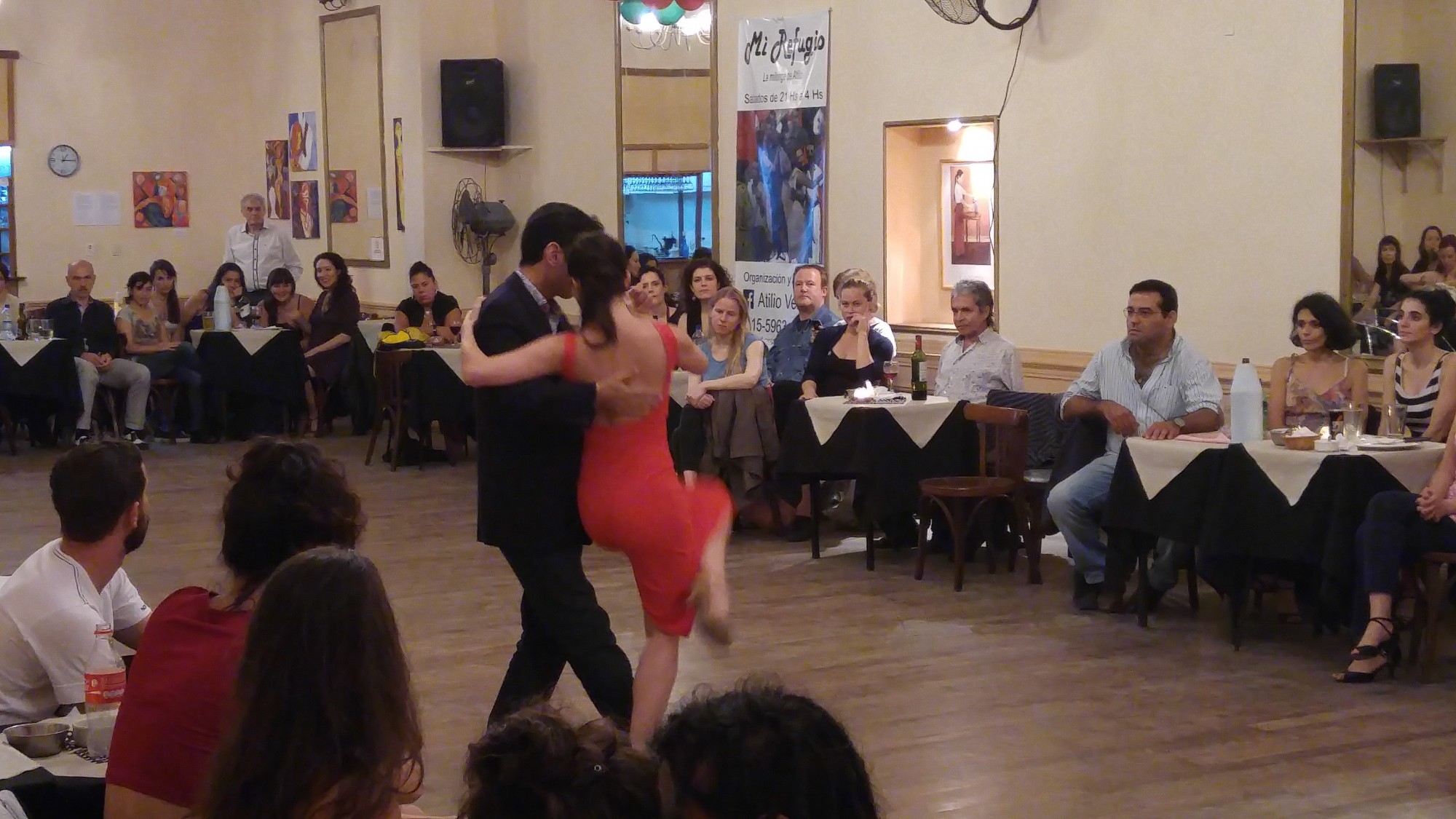 El Nacional was the first place I attended for a Milonga, and I was also lucky enough to check out some of the Pre-Milonga classes on this Voyage. Now I do not remember exactly who the teachers were at each class, was a bit difficult to get names or communicate since they were almost all in Spanish.  Some instructors were indeed able to translate a little here and there, but since I know some tango, watching the body language and demonstrations is about as much as you really need for these classes.  Most were going over some basics, and then working on a figure for the rest of the class. At El Nacional, these classes were pretty small, especially for the space. From what I know now, this is not really the better pre-milonga class, but your mileage will vary.

One thing that came from these classes was communicating with some of the locals and other travelers. To socialize (and there is more socializing than dancing at Milongas!) you need to know someone, and group classes is the fastest way to meet new people.  Most people who attend the pre-milonga classes are locals, not tourists or travelers.  You can identify the travelers pretty easily from the tourists, and if you can imagine, I stood out. But Thanks to meeting some locals at El Nacional, I was referred to a group class that many in that group went to.  Was it anything special… not really for the price, and the skill level of some dancers and the teacher weren’t that high.  I should have taken advice from my favorite teacher to stick with the big names and not go where other people suggest, but wanted to meet some new people!

Yira Yira is a fun Milonga, and was literally a bock away from where I was staying for these first few weeks.  This place is where I met a group of friends from New Zealand, and elsewhere in what the proclaimed is their Kiwi group. It was thanks to a Pre-Milonga class here that I was able to meet most of them and exchange contact information. 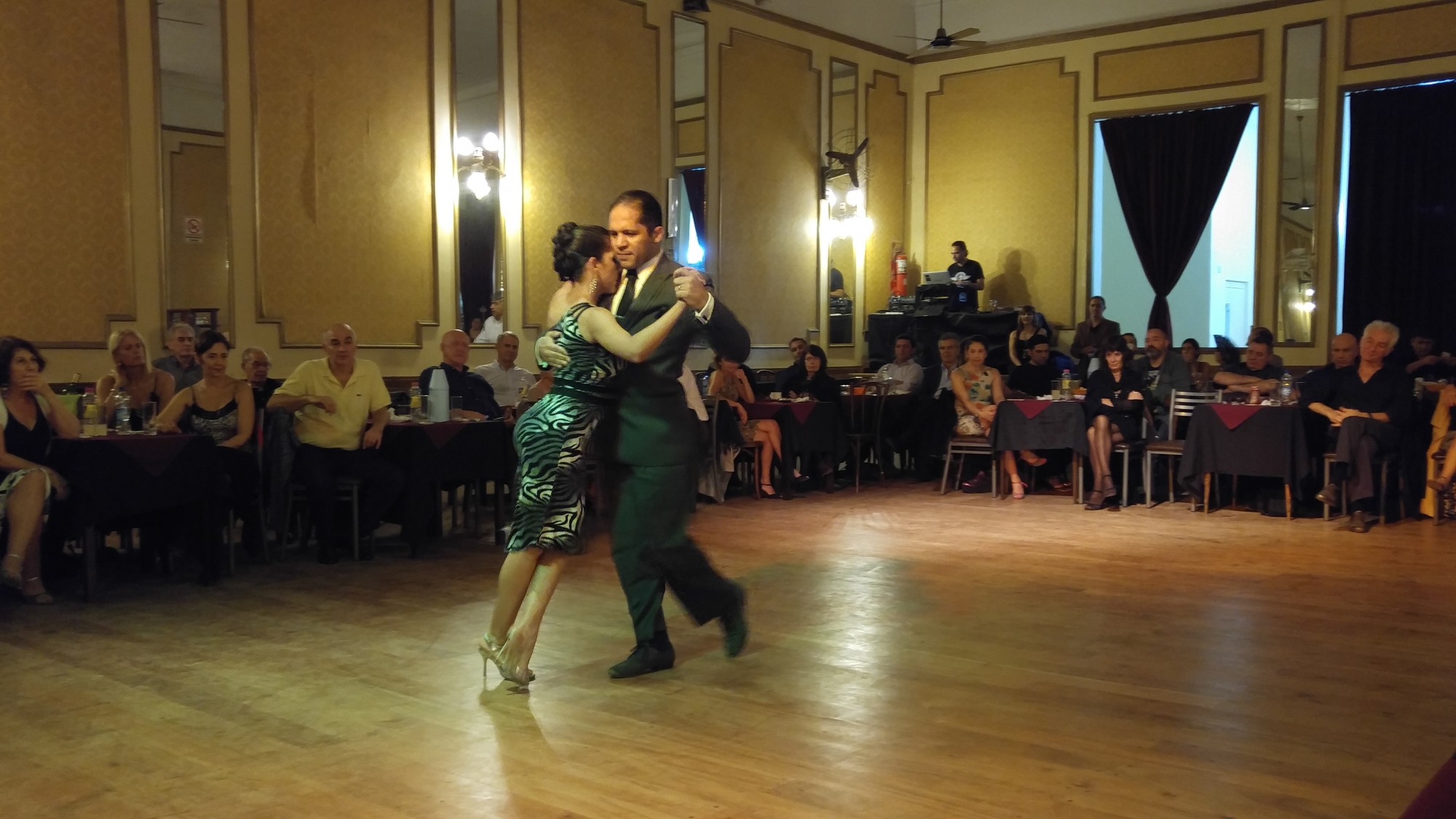 Yira Yira is a wonderful upstairs venue, good service, and I was somehow given one of the best seats in the place, smack in front in the middle side.  I even took an awesome video of the performance of that night, completely unobstructed. I have two videos, but currently only one is available, you can find it here! The dancers here were better than others I’d experienced thus far, and the class was also a bit better.  I was told it was a little light on the crowd this evening, most likely due to the rain. I do want to return and check it out!

El Tacuari is an interesting little venue and I was invited to join by some of the Kiwi’s. This was a Saturday night, which I’ve found out is more of a couples night out for whatever, and being solo it is quite hard to get dances.  But thanks to friends, made it easier and got some dancing in. There was an interpretive dance show instead of a Tango show this evening.  I didn’t get any pictures, but was a neat out of the way little venue. Music was okay, but just the wrong night I think.  I was late and didn’t make it to the Pre-Milonga class. 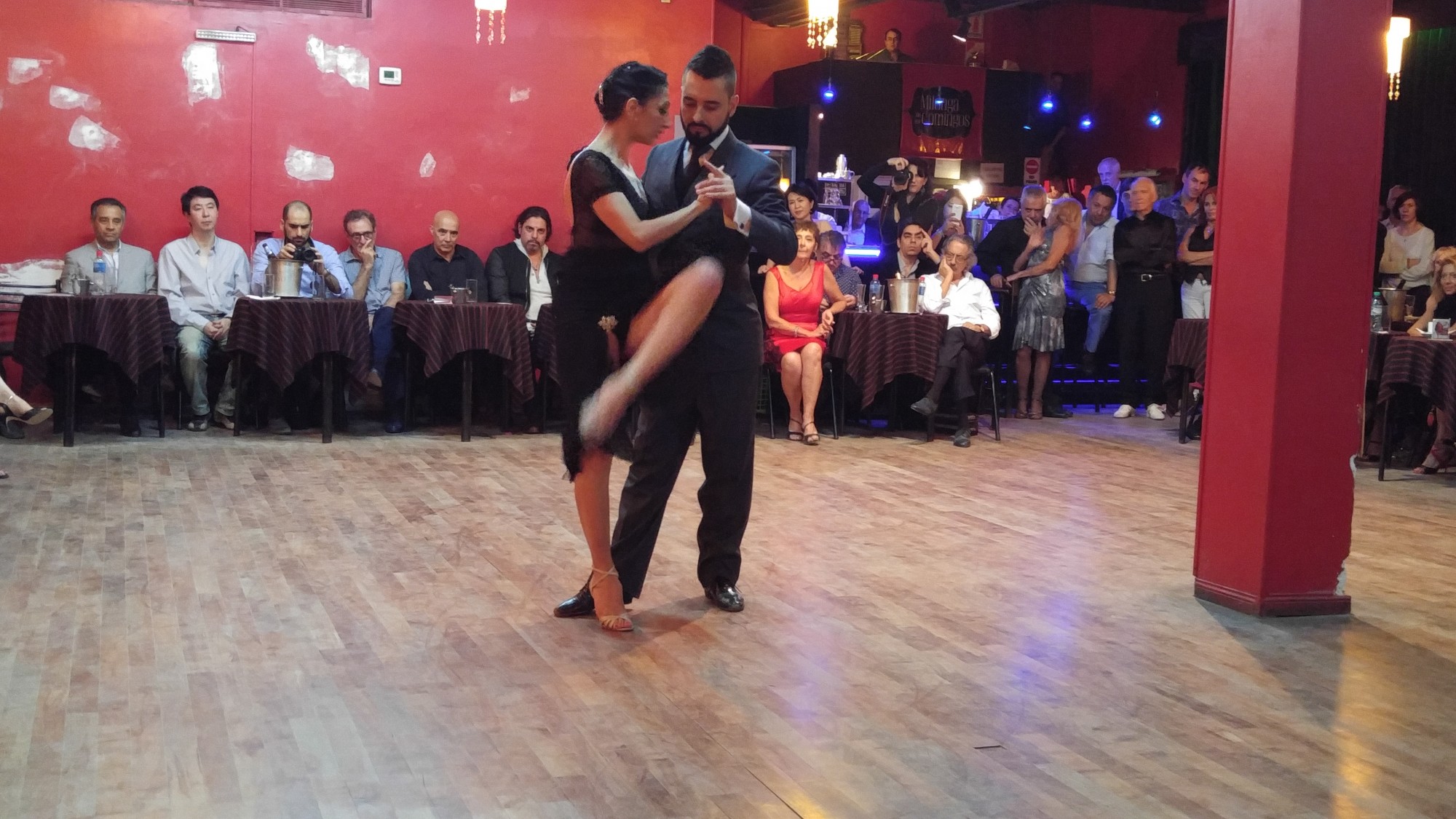 The last Milonga I went to for these first 2 weeks, was El Beso. This was at a suggestion of the Kiwi’s once again, and I’m glad met them, as it’s given extra direction and suggestions I wasn’t even thinking of.  I arrived for the class before hand, and was really underwhelmed.  Didn’t really meet anyone new thanks to this class, and what was being taught is completely different than what I’ve been taught in the past. The class was longer and more expensive than any of the others, I’d say skip out on it.

El Beso though I must say, was a more authentic experience thus far of what you’d think of for a traditional Milonga.  The seating was segregated by gender, small floor in a small venue, and it was completely packed.  This was also the second time I got to see Javier Rodriguez perform.  I even won a bottle of champagne, which Javier drew the number! Met some new friends here as well, who I continue to speak with. But this Milonga was VERY packed, to the point I stopped dancing for a bit, just more crowded than I was comfortable dancing in, even compared to festivals.  This also made it really difficult to cabeceo through the crowds… especially with how crowded it indeed was.  This one I’ll definitely be returning to, maybe on not so crowded evenings… 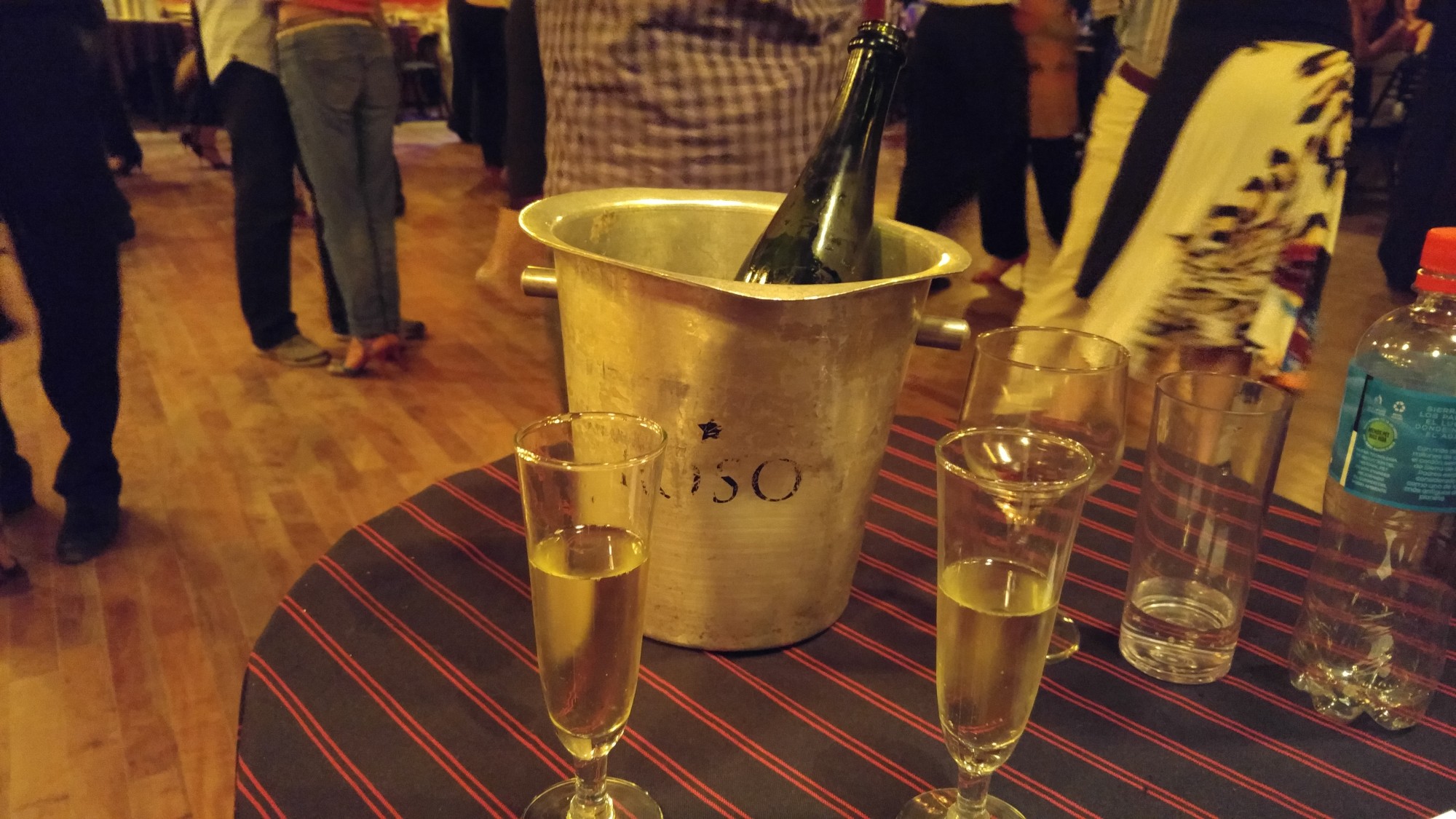